I’m back from Social Media Marketing World 2019, the “go to” conference for those of us who care about all of social media, and especially the free or organic stuff on Facebook, Twitter, Google+ (well, not Google+ any more, rest in peace), LinkedIn and the gang. It’s a MUST ATTEND conference if you’re a digital marketer, and I highly recommend it. It occurs each year in San Diego; in 2020, it will be March 1 – March 3. And, of course, the earlier you buy your tickets, the cheaper they are. 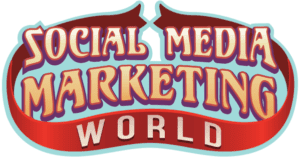 Here’s my summary of what was what at the conference: trends, tips, and musings about the past, present, and future of social media marketing.

Every conference has its themes, and Social Media Marketing World 2019 had some themes or trends from past shows and some new ones, namely:

The Rise of Storytelling in All Its Forms

Lurking behind nearly every presentation at Social Media Marketing World was the rise of storytelling.  The keynote speakers, for example, continually hinted at the importance of “Content Marketing,” meaning the death of YOU BROADCAST and they LISTEN PASSIVELY and the rise of engagement and interactive content. So, not just creating good stories but stories that engage users and get them to a) like, b) comment, and c) share plus the rise of UGC (User Generated Content) in which as argued by Mark Schaeffer in his new book, Marketing Rebellion: the Most Human Company Wins.

That was the hype, at least. But digging into the details, three presenters really got into what we can do to be better storytellers and better writers.  First and foremost, there was Melissa Cassera. A screenwriter by training, she gave a very beefy presentation on the art of storytelling in three acts and also explained some “paradigms” or “plot lines” into which you can fit your story. These would be storylines such as “overcoming the monster,” “rebirth,” “rags to riches,” or just using “humor” for your brand. She hinted at how Hollywood uses formulaic techniques in all the major productions; and the difference between a one-time shot vs. an episodic show. Think about “Game of Thrones” for instance, in which each “episode” tends to leave you hanging so that you want to come back for the next one. As brands, we want to create stories that are not just “one offs” but rather parts of larger narratives, so that people “stay tuned” for the next time. This also fits with how “content that disappears” such as Snapchat, Instagram, or Facebook stories… because the content “disappears,” users feel compelled to catch it while they can.

Mike Kim also spoke about story, but he zeroed into just the “hook,” the kind of writing in emails and posts that “hooks” a reader into taking the next step. He gave examples such as “Not sure if this is for you, but…,” As you may know,” “You’re never too young to be a great ___________, you’re never too old to be a better one,” and ““What do you really know about?” His main concept was to use quick, quirky little phrases that engage users without insulting their intelligence.

Finally, Ann Handley, author of Everybody Writes, got into the basics of  email newsletters. She advocated having a defined “persona” to whom you are writing, putting the needs / interests of that “persona” first. She also had some interesting ideas about not just personalizing your email newsletters but “asking” for feedback, so that it becomes a two-way conversation. After all, email is the “original” social media network and still going quite strong despite all the buzz about the newcomers like Snapchat or TikTok.