Nike has done it again, or rather, “oops, they’ve done it again,” to be all Brittany Spears on Nike. Nike waded into controversy by releasing its Air Max 1 USA sneakers with the so-called “Betsy Ross” flag with thirteen stars in a circle. Let’s leave aside the politics of whether the flag is or is not “racist,” and instead look at what the controversy teaches us about marketing in general and Nike marketing in particular.

In case you don’t know the particulars, Nike released a new sneaker design just in time for Independence Day that featured the so-called Betsy Ross flag on the back. You can do a quick Google search here to view images of them. Apparently the Betsy Ross flag has – to some (unclear) extent become associated with White Nationalism and Racism. This is entirely clear one way or the other; one big question is if a White Nationalist uses such-and-such symbol does that mean it’s forever tarred and feathered as racist? Not clear. Newsweek has a good article on the history, here. So let’s just be objective and realize that a) Nike chose to use this flag, and b) for some people (but not for all people), this flag has racist overtones. As marketers, let’s refrain from making a political decision about the flag one way or another. As an aside, a lot of this controversy has to do with “symbols.” What does a “symbol” like the Betsy Ross flag convey? And does this “symbol” mean different things to different people, and even different things in different times? Symbols are problematic; their meaning is inherently subjective, no matter how much one side or the other pretends to believe that they have “objective” meanings.

Instead, let’s dive into some marketing issues. First and foremost, was this “poor planning” on the part of Nike? 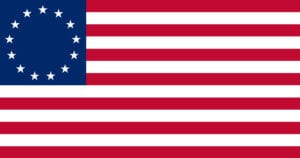 The shoes were not only already in production but had been shipped to retailers before celebrity spokesperson Colin Kaepernick weighed in, judging the sneakers as “racist” and advocating that Nike pull them from its inventory. Nike complied and that then sparked the firestorm of controversy on both sides of this issue. It got people talking – a LOT of people talking about Nike, about Betsy Ross, about the Betsy Ross flag, and about its possible connection to racism.

Someone at Nike probably did a terrible, horrible, no good job, of researching this flag as a symbol before the design was made. Ouch. Huge cost to the company.  It’s even created a black market in the shoes, which are selling now for thousands of dollars. You have to wonder if Colin Kaepernick now runs Nike marketing as much as he seems to, why they didn’t run the design by him BEFORE going into production?

Second, this brings up (again for Nike) the problematic nature of celebrity spokespeople. Whatever your opinion might be of Kaepernick, you have to wonder if Nike is wise in giving him so much power over their brand. He’s his own person. With his own agenda. With his own ambitions, foibles, controversies, etc. And the tighter that Nike becomes associated with him, the more power he has in the relationship. Celebrity spokespersons often end badly for brands.  Take a look at how Subway got more than it bargained for with Jared Fogle as a brand ambassador. #yuck.

The story’s not over with Kaepernick and Nike, and who knows how it will end.

Third, however, maybe Nike is crazy smart. Maybe this was all thought-through in advance. Maybe they WANT the controversy to get people to talk about the brand (all publicity is good publicity, or so goes the theory).  Or, maybe they want to closely identify their brand with a Leftist political agenda. Many pundits and commentators are pointing out that the people who are offended by Nike’s actions are not exactly the folks who buy a lot of Nike shoes. So is this a win for Nike? Only time will tell. So far, apparently their stock and their sales have weathered the relationship with Kaepernick quite well, thank you very much. We seem to forget that Nike (and all corporations) are in the business of selling stuff. If controversy sells more stuff, bring on the controversy. If being Leftist sells more stuff, then bring on the Leftism (and so on and so forth). It seems unlikely that Nike would go all the way into full production and shipment of the shoes as part of a big stealth plan, but you never know.

Finally, the next issue here has to do with politics. We live in a divisive political age. Politics seems to be engulfing everything, and many brands (Google, Apple, Nike) seem to be taking sides in the “culture wars.” The question for you as a marketer is whether this is something you want to do. Politics is a dirty, nasty, bitter game in which the mud flies and the costs rise.

I’d recommend you think long and hard about becoming a “political brand.” Big companies might be able to do this and survive, but small companies probably should think twice before embracing political controversies.  Do your research and be wary of predicting the future. The future by its very nature is uncertain.